"Israel Is, God Said It"

Drawn from their lifetimes of study of Scriptures, History, and living in Israel, Drs. Leeland & Mary Crotts share their new book, ISRAEL IS! God Said it!. 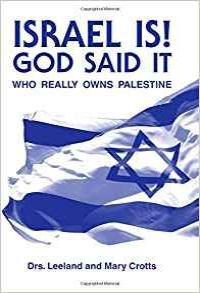 It is about God’s prophetic promises to Israel and their fulfillment.

Seven predictions from the Bible are discussed in this book.

WHO OWNS THE LAND?  The prophecies in Ezekiel 35-37, are explained and illustrated clearly showing Israel has the birthright to their ancient homeland. It is exciting to see God fulfilling prophecy in our time. It all points to Messiah is coming soon. The last chapter explains how you can be ready for His coming. It is available at www.amazon.com.

« Back to Blog
It was a life-changing experience to live in Israel!
Dr. Suzannah S., DVM, WA , Alumna